PROGRESO, Texas — U.S. Customs and Border Protection reports it put a stop to an unusual smuggling operation at the Texas-Mexico border last week.

CPB said that on Dec. 30, a 20-year-old woman from the U.S. arrived at the bridge and, after an initial inspection, was held for further inspection. It was then that the spider monkeys were detected. 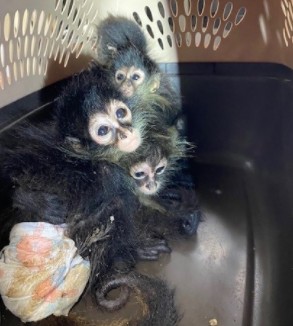 Four spider monkeys recovered at the Progreso International Bridge in Progreso, Texas, in this image from Dec. 30, 2021. (U.S. Customs and Border Protection)

The animals were removed from the bag and placed in an animal container. They have since been returned to Mexico.

The woman was issued an undisclosed penalty.

Spider monkeys, the agency said, are typically found in the tropical forests of Central and South America and are considered endangered under the Endangered Species Act.

9 rousing art exhibits throughout Austin to welcome the new year

People From California, New York and Chicago Are Moving to Texas

People From California, New York and Chicago Are Moving to Texas