Miller, a vocal critic of Gov. Greg Abbott’s pandemic handling who contemplated a run for governor, said he is seeking a third term because there are “projects I need to finish before I move on.”

White is campaigning as an ethics-focused foil to Miller, taking digs at the incumbent’s past controversies – among them using taxpayer money for two trips that involved getting a “Jesus Shot” injection in Oklahoma and competing in a Mississippi rodeo show. Miller ultimately avoided criminal charges after an investigation into the travel.

More recently, a political consultant for Miller was arrested in an alleged scheme to sell access to hemp licenses, which are issued by Miller’s department.

“I am absolutely fed up with this Austin swamp stuff,” White said in an interview, accusing Miller of corruption and hurting Texas farmers and ranchers.

“Now we’re finding out that Sid Miller’s campaign team has been meeting in the back alleys behind the Texas Department of Agriculture, taking bribes” from people seeking hemp licenses, White told the Mark Davis radio show in January.

Miller downplayed such attacks as “dirty politics” and “slinging mud, hoping some of it sticks.” Asked if he is still working with the consultant who was arrested in May, Todd Smith, Miller confirmed that he is and said there is nothing to the allegations.

White, the Legislature’s only Black Republican, emphasized his energetic leadership in contrast to what he calls Miller’s ineffectual management of the state agency. White said Miller is “worse than Biden when it comes to protecting farmers and ranchers in Texas.”

“Robust legislative engagement is sorely missing, and if it was there, our agriculture industry could work even more efficiently and be more prosperous,” White said.

For his part, Miller said he doesn’t think White is qualified. The commissioner said his opponent “doesn’t know anything about the agency,” which he said has the “highest ethical standards.”

“I’m an eighth-generation farmer and rancher,” Miller said. “I live, eat and breathe agriculture. I still make my living off the land – he’s none of that.”

The incumbent said his re-election campaign will focus on stopping foreign ownership of agricultural land and “fighting back against the overreach of the federal government,” among other issues.

Miller has a strong lead among the most likely GOP primary voters over White, 34%-3%. But a whopping 61% are unsure or don’t know for whom they’ll vote, according to a poll released in November by the Texas Hispanic Policy Foundation.

Miller’s baggage in part makes him one of the weakest incumbents on the Republican slate, said Cal Jillson, professor of political science at Southern Methodist University.

Miller easily won his seat in 2014, but four years later, he got just 55.8% of the primary vote and won by five points in the general election. The state consumer protection agency markets Texas products, administers school lunches and pursues economic development opportunities, among other things.

“Miller has the facility for getting himself in difficult situations, in terms of both politics and ethics,” Jillson said. “He’s the likely favorite, but he’s not invulnerable.”

That means White is a credible opponent to Miller – assuming he can raise enough money to be heard, Jillson said.

Miller had nearly $108,000 in the bank, compared to White’s $63,000, as of June 30, according to campaign finance records filed with the Texas Ethics Commission.

“Miller will want to talk about his own accomplishments as agriculture commissioner and those of the broader Republican Party while he’s been in office,” Jillson said. “White will have to make the argument that [Miller] has been asleep at the switch.”

“Whether something happens along the way that seems to make those charges resonate remains to be seen,” he added.

White is already getting some big money from the action arms of notable backers such as the Texas Forestry Association and Texans for Lawsuit Reform, a powerful funder in Republican state politics.

Still, more voters will recognize the incumbent’s name, Jillson said. White is starting from scratch outside of his own district.

White’s staunchly conservative record in the Texas House which includes authoring the state’s open carry law and overseeing the recent passage of permitless carry, allowing Texans to carry handguns without a license or training. The former Army officer rode the Tea Party wave during his 2010 election to a mostly white seat and has maintained a reputation for being polite. Much of his policy work focused on criminal justice.

“Earning the trust of your fellow citizens is supposed to be tough,” said White, who has received support from Texas House Speaker Dade Phelan. More than a dozen other House colleagues and state Sens. Charles Perry, Drew Springer and Robert Nichols have endorsed White for the job.

Meanwhile, Miller says he is out-campaigning his primary opponent. He boasted of having “one of the largest and most enthusiastic audiences of any elected leader on Facebook,” and alluded to White as his “establishment Republican opponent” in fundraising emails.

Critics have repeatedly called out Miller’s sharing of misinformation and racist memes on his social media accounts. His Facebook page has 841,000 followers.

Both candidates are trying to closely align with Donald Trump, casting themselves as early supporters of the former president – who endorsed Miller just before New Year’s. Miller said Trump called him on the phone, and they talked for 15 or 20 minutes.

“Commissioner Sid Miller is a terrific Agriculture Commissioner for the Great State of Texas!” Trump said in a news release. “A farmer and champion rodeo rider, Sid was an early fighter for our America First agenda.”

“Farming is hard, but ethics should be easy,” Hays said in her campaign announcement, referring to Miller as “scandal-ridden.”

“If you grow up in rural Texas, like I did, you learn Monday through Saturday that farming isn’t easy, then on Sunday you learn, ‘thou shall not steal.’ Our Ag Commissioner and his political operatives apparently missed those lessons,” Hays said in the news release.

Before being elected agriculture commissioner, Miller served six terms in the Texas House. 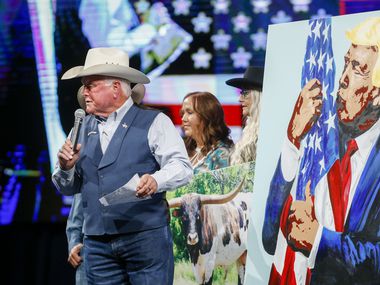